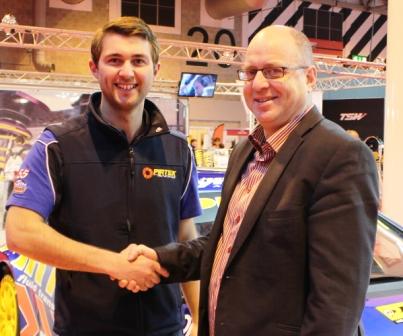 Jordan, 23, was the BTCC independent drivers champion at the close of the 2012 season, and has his sights set on the overall crown in 2013. He is hotly tipped to beat works drivers from manufacturers’ teams this year.

The Pirtek livery for 2013, complete with Revive! branding, will be seen in action for the first time at Donnington Park on 21 March. Pirtek is racing one of only eight new generation touring cars (NGTC) on the circuit. Its NGTC – spec Honda Civic with a Neal Brown engine – is the same as the Honda Works team car.

Jordan’s debut BTCC season was in 2008 and he made BTCC history by being the youngest ever driver to qualify on pole position.

Revive! managing director Mark Llewellyn says: “Andrew Jordan epitomises what Revive! is all about. Throughout his career he has challenged people’s perceptions – from qualifying on pole position at the tender age of 19 to giving works drivers a real run for their money. At Revive! we have taken strides to turn around the prevailing opinion of mobile cosmetic vehicle repairs. Technicians are trained at our IMI -approved accreditation centre and we are dedicated to quality and professionalism. Like all the best sponsorships, our relationship with Andrew is rooted in synergy and mutual respect. We are proud of what he achieved in 2012, and know he’ll be on the pace this year too.”

Revive! specialises in repairing minor scuffs and scrapes to vehicle bodywork and alloy wheels. It has the largest network of smart repairers in the UK and is the first to have ATA accredited technicians.

As the preferred supplier of smart repairs to major car dealerships and fleet operators, Revive!’s customers include Alfa Romeo Fiat, Lex Autolease and Mercedes.  The company works closely with the Institute of the Motor Industry to drive up standards within the smart repair industry and as a result has paved the way for smart repair to become a top quality alternative to bodyshops for minor vehicle damage.