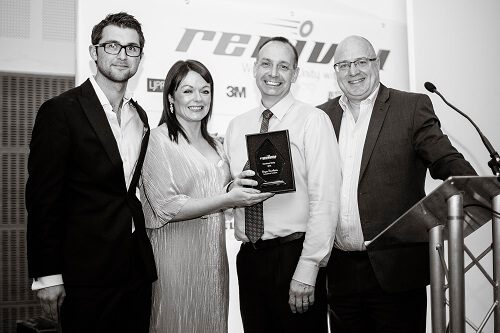 Each year Revive! franchisees from all over the UK meet up for an annual conference to review the network performance over the previous 12 months and hear the company’s plans for the future. The 2017 conference was held at the home of English football, St George’s Park in Burton. you can see more images in our album. 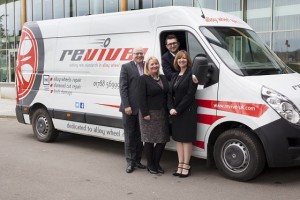 Revive! Managing Director Mark Llewellyn opened the conference by congratulating the network on exceptional sales growth during 2016 and he announced that significant new national accounts contracts will boost the company’s turnover by an expected 20% during 2017.

Operations director Terry Mullen and franchise director Cathryn Hayes together with franchise manager Julie Eley gave a presentation showing just how far Revive! has come since the company began in 2004 when there were just 35 vans on the road.  Moving closer to its goal of achieving a £20m turnover by 2020, the company’s UK network is now made up of 58 franchisees with several static workshops, 150 vans and dedicated wheel vans supported by a 40-strong head office team.

Revive!-sponsored BTCC racing driver and 2013 champion Andrew Jordan took time out of his pre-season training schedule to update delegates on his latest news.  Behind the wheel of a BMW 125i M Sport car for the first time as part of the multi-award winning West Surrey Racing team, he told the conference that he is determined to win back his title and believes his new BMW team will help him achieve his ambition.

Also included in the day’s events was a suppliers’ showcase hosted by LKQ coatings, 3M, Akzo Nobel and Mirka.

In the evening a gala dinner was held at which winners of the 2016 Revive! awards for sales achievement were announced.

The Franchisee of the Year 2016 Award went once again to Nathan Holmes, Adam Holmes, Andy Blackhurst and their team at Revive! East Anglia for another outstanding year in which they were also named the best franchisees in the whole of the UK by the bfa.

Mike Haselden from Revive! Chester and Mike Morgan from Revive!  Preston were jointly awarded the High Performer Award for growing their turnover by over 50% year-on-year.

Running alongside the business-related awards were two special peer nominated categories to recognise the franchise team player of the year and outstanding head office support.  Nathan Holmes a director of Revive! East Anglia was named as Franchise Team Player of the Year and head office supervisor Faye Williams was presented with the Outstanding Head Office Support award for keeping everyone motivated and working together.

Said Terry Mullen: “As our company moves in to the next exciting phase of expansion it’s important to highlight and recognise the achievements of the people who have helped us to reach such outstanding results.  The conference is the time of the year that we can all get together and have the opportunity to celebrate success as one big team”

Mark Llewellyn added: “It’s been an incredible year. We’ve worked hard on strengthening our IT support and internal systems in readiness for the next phase of our Revive! growth plan. Since setting up Revive! In my parent’s back bedroom over 10 years ago, I have been determined to set standards not just for our own technicians but for the whole industry. As a result, cosmetic smart repair is row recognised as a quality alternative to traditional bodyshops with a formal IMI accredited training path.

Today, Revive! has the largest UK network of accredited technicians and is the only company to be in a position to offer this.  Our customers demand the very best and know they can rely on us to deliver consistency of service and quality time after time.”