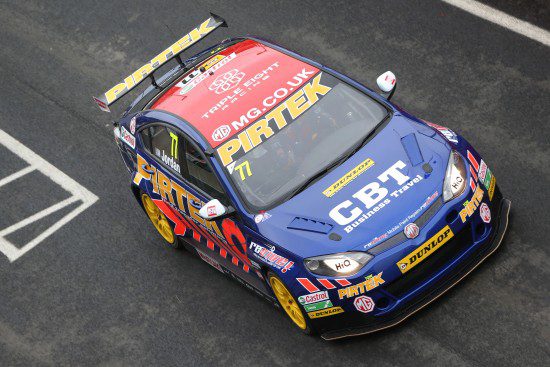 Valuable Points for Jordan at Thruxton

As expected it was all action again this year at the UK’s fastest circuit (Thruxton) on 9th and 10th May.

A solid weekend for Revive!’s driver with sixth, seventh and second place finishes in the works MG6 GT run by Triple Eight Racing, keeping Andrew in the hunt for the championship.

A difficult round of qualifying resulted in an eleventh place grid start for the first race on Sunday, leaving Andrew unsatisfied after achieving pole at the circuit in the last three seasons. The margins are so close this year, qualifying only six-tenths of a second slower than Aron Smith who finished on pole. The eleventh place start presented Andrew with a challenge to work up through the grid to earn his points.

In classic Jordan style, Revive!’s racer fought his way up through the grid turning an eleventh place start into a sixth place finish. However, a lack of straight line speed meant a thirteenth place start for race two, leaving Jordan another mountain to climb. Undeterred, Jordan got back to work wriggling up through the pecking order and managing to grind out a seventh place finish, arriving on the coattails of Sam Tordoff’s BMW.

The grid draw for race three saw Andrew in with  some fortune, placing him in second position on the grid, a great opportunity to get his first podium of the day. Despite the team’s efforts, the pace of Morgan’s Mercedes was just too much for Jordan’s MG, with Adam Morgan starting and finishing first for WIX Racing in a car which looked very racey. Second place for Jordan was a great way to round off the day, adding some valuable championship points to his tally. Andrew commented: ”Adam was setting a very impressive pace and I was on the limit of where the MG felt comfortable.”

“It’s not been the usual Thruxton weekend I’ve been used to having,” said Andrew. “It’s important not to get too frustrated about it and you’ve got to keep working at it. To get a podium in the final race is a really good way to go into the four-week break, but we’ve got work to do. It’s all very well saying we need to be consistent for the championship but we also need more pace. We need to be challenging for the top three or four on a regular basis. It’s good that we’ve now got a bit of time to go away and work at it.”

Read up on Jordan’s previous interviews with Revive! here.

Revive! are a leading service provider for repairing minor damage to cars with over 135 technicians nationally, servicing fleet, dealer and retail markets. If you have any scuffs and scrapes which need a professionals attention, contact Revive!