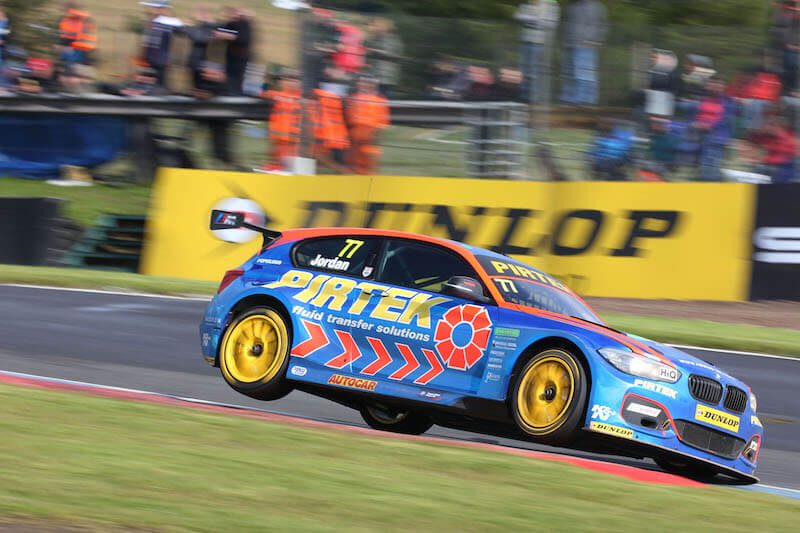 Andrew Jordan produced one of his most impressive drives of the Dunlop MSA British Touring Car Championship season at Knockhill but was left ruing the misfortune of qualifying following the seventh meeting of the campaign.

Andrew, who is in his fifth year of Revive! sponsorship, went into the weekend keen to make the most of the pace in his West Surrey Racing-run BMW 125i M Sport, which has proven to be of the most successful cars around the Fife circuit in recent seasons.

Heading into qualifying in confident mood, Andrew was one of the quickest men on track in wet conditions early on but then encountered traffic as the circuit dried out and found himself in an unrepresentative 17th place on the grid.

Having battled his way forwards to 13th in race one, Andrew had hoped to bring home a top ten finish in race two but an incident at the opening corner saw him forced into retirement and left him down in 30th place on the grid for race three.

With nothing to lose, Andrew was a man on a mission from the moment the lights went out and battled his way through the pack to 13th place by the finish.

In fact, had it not been for the deployment of the Safety Car in the closing stages of the race – which brought his charge up the order to a halt – then a top ten finish could well have been the end result.

“The pace in the car has been clear to see today and it’s just a legacy of qualifying that we’ve not been able to convert it into a really good result,” he said. “Starting in the middle of the pack at Knockhill is always difficult, and the aim was to just try and move forwards as best as we could during race day.

“Having made up places in race one, I hoped we could get into the top ten in race two but unfortunately the incident at the start meant we instead were at the back for race three. It meant we had nothing to lose and we had to push hard to try and fight our way back.

“The car felt much better than it had done in race one and I had so much confidence that every time I came up behind someone, I could just commit to the move. The top 15 was the aim and to get into the points so quickly was a surprise – it could well have been a top ten without the Safety Car towards the end.

“I’d even go so far as to say that that was one of my best drives given where we started from and it’s just unfortunate that the end result wasn’t a bigger points score on the board.”