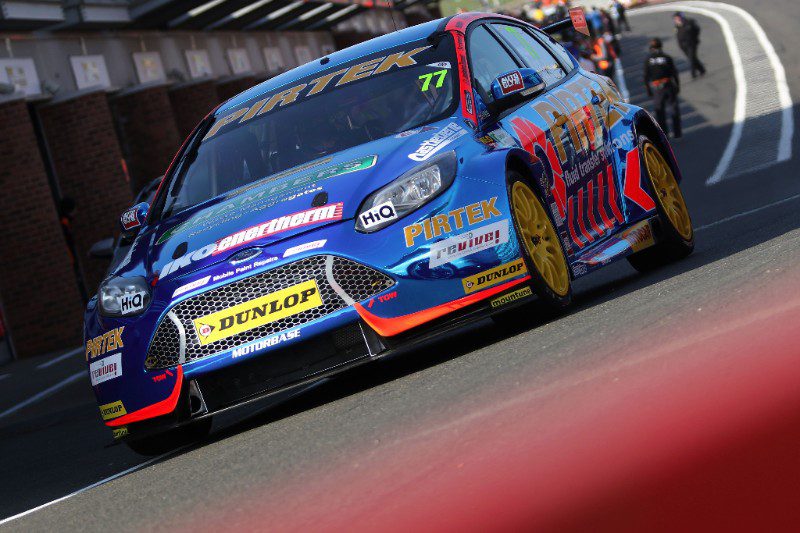 Revive!’s Andrew Jordan scored points in each of the races on Sunday at Donington Park in the second meeting of the Dunlop MSA British Touring Car Championship. However a challenging qualifying session left a mountain to climb.

Jordan went into the weekend full of optimism, with hopes of competing for his first podium finish of the year. It was a solid free practice and Jordan looked like he could secure a place near the front of the grid for race one however a combination of events meant it wouldn’t be his weekend.

First of all there was a scare early on in qualifying when the car failed the ride height test. This meant Jordan was stripped of all his times and would have to start again from scratch.

As Jordan returned to the circuit, there was still some time left to grab a good time. But in came the rain which resulted in Andrew spinning out at the Old Hairpin. The bad luck continued for Jordan when qualifying was halted and restarted later with a five minute blast for pole on the drying circuit. Jordan could only watch on from the pits as the others benefited from the ever improving conditions. So 25th for Jordan in qualifying.

Faced with an uphill battle, the pressure was on to get in the points and secure a stronger starting position for race two. It was a hard drive but Andrew worked his way up through the pack to 14th. So good progress in race one. Progress continued in the second race as the team advanced up to 12th. Early contact with Hunter Abbott’s Chevrolet cost Jordan some time and quashed the prospect of further progress.

The team opted to give the car a radical reconfiguration and the soft compound tyres for the third and final race. Jordan made good progress through the pack slotting himself in at 8th position, but as the tyres’ performance started to fall away it became impossible to hold on to his position, eventually dropping back to 10th.

Andrew Jordan sits on the periphery of the top 10 in 11th position on 44pts in the overall championship.

“What happened in qualifying really hurt our weekend and we weren’t able to fight back quite as we hoped to,” he said. “We were chasing the handling of the car a bit in the first two races but then we made some radical set-up changes for race three and it was transformed.

“In the early stages of the race, the car felt so much better but I knew at some point that the performance of the soft tyre was going to drop away and that was exactly what happened. I think we managed it the best that we could and we’ve come away from the weekend with three points finishes, although we obviously wanted more.

“Given the pace that is in the car, this weekend is a bit of a missed opportunity but at the same time, it means we go to Thruxton in three weeks without any ballast and I’m going to come out fighting for three strong results.”

We now look ahead to Thruxton for the next BTCC racing weekend on 7th and 8th May. Make sure you watch the Sunday’s racing action live on ITV4!

Revive! are proud sponsor of Andrew Jordan in The British Touring Car championship. If it’s minor car body repairs you need, make sure it is Revive! for a service which is hassle free with a lifetime ownership guarantee.

Click here and get your free no obligation quick quote today.