Latest NewsBTCCJordan bounces back at Thruxton 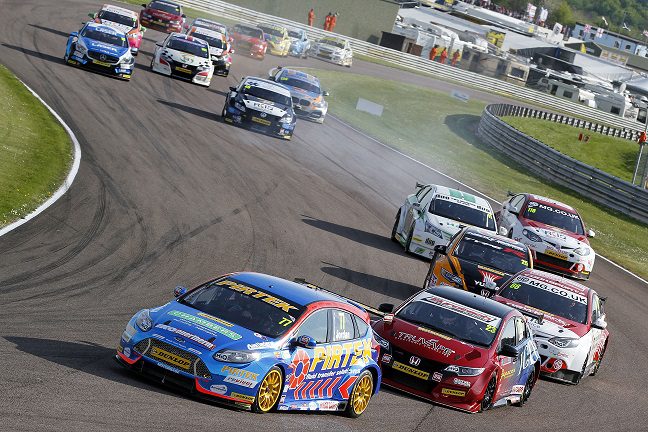 Jordan bounces back at Thruxton

A successful weekend for Revive! sponsored Andrew Jordan at Thruxton in the Dunlop MSA British Touring Car Championship, as he secured 2 podium finishes including his first race win of the season.

Jordan’s bounce back ability was certainly proven this weekend following the challenges faced at Donington Park in April. Confidence, renewed vigour and important points were taken from his performance at Thruxton, proving to everyone that the team, the car and he will be mixing it with the championship leaders.

Andrew’s unshakeable resolve was evident as soon as the tyres met the track for the first practice session of the weekend finishing second quickest.

The challenge began to amass in qualifying, which resulted in an eighth place grid spot for Team Jordan in the opening race of the weekend. Jordan’s bounce back ability began to shine through again as soon as the racing action commenced in race one, weaving his way through up to third position when a sudden incident forced the officials to draw out the red flags.

A nervy event with Matt Neale’s tyre puncturing resulted in a multi car incident with cars and debris sprawled out across the track.

Jordan was able to attack the front from third place on the grid in race two, managing to craft an opening and exploit it early on to perch himself in second position behind race leader Adam Morgan. Jordan made his final move with two laps to go at Allard to secure his first race win of the season to the elation of Team Jordan.

Unfortunately a puncture in race three thwarted the prospect of any more points being added to the championship board, however nonetheless it was a very profitable weekend. Jordan now sits in eighth position in the championship standings and just 21 points away from the top spot.

“I think the weekend has gone really well,” commented Jordan. “There is a bit of disappointment initially with the way race three ended, but to come away from the weekend with a win and a podium is great – especially as every man and his dog kept reminding me I hadn’t won since Croft 2014!

“To come back from a tough qualifying session and to start the day with a podium was great and in race two, I knew I just had to wait for the right moment before making a move on Morgan and the plan worked a treat. Had it not been for the puncture in race three, we’d have been right in the mix there too, so we have shown the pace we have in the car and have a good platform to build on.

“I’m pleased that I’ve now opened my account with Motorbase and I feel in a really good place with the team; they’ve welcomed me with open arms. This was where my season really begins after a tough start, and it’s onwards and upwards from here.”

The next dates for Revive! sponsored Jordan are the 4th and 5th of June, where he heads to Oulton Park for more BTCC racing action. You can catch all of the racing live on ITV4.

Revive! UK have been proud sponsors of Andrew Jordan since 2012 whilst offering customers a convenient and professional mobile car body repair solution. Whether it’s a scuffed bumper, kerbed alloy wheel or paint scratches, don’t worry, we can fix it. We have professionally accredited mobile technicians nationwide so if your car is in need of a repair click here to get your free no obligation quote today.