Latest NewsJordan ahead of Thruxton Thriller 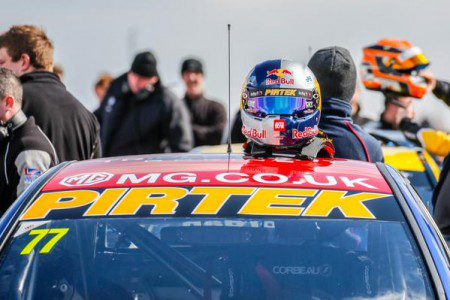 Jordan ahead of Thruxton Thriller

Revive! sponsored Andrew Jordan is in confident mood ahead of rounds seven, eight and nine of the Dunlop MSA British Touring Car Championship at the high-speed Hampshire circuit of Thruxton (9/10 May).

After a breakthrough weekend at Donington Park for the second event in the season, Andrew is relishing the unique challenge of Thruxton in the works MG6 GT run by Triple Eight Racing.

Despite a tough start to the season at Brands Hatch, Andrew was back at the forefront of the BTCC action at Donington Park with two fourth places and a second. That catapulted him into fourth place in the overall driver championship points, just 12 points away from the early leader. However, there is a chance that the Donington result might get even better as the race officials will meet at Thruxton to consider an incident in the third Donington race when Andrew was pushed wide at Coppice after contact from Matt Neal. An amended result, giving Andrew a belated victory, is one of the possible outcomes.

Whatever the result of those deliberations, Andrew says he is ready for the challenge of Thruxton, where driver ability and car control really come to the fore over the fast sweeps at the back of the track. “We’re going to Thruxton on a high and I’m going to be trying to break my record and get a fourth consecutive pole position. We really made some positive progress at Donington. Brands Hatch was really tough but I feel like I’ve clicked with the team and we’ll be on a roll from now on.”

Speaking to Revive! Managing Director Mark Llewellyn,  Andrew revealed his pleasure at finally getting the team working effectively together at Donington.” The car set up still wasn’t right at the start of the weekend but by the end of the day we were really fast and very competitive. If it wasn’t for a bit of contact in the last race we would have finished on a real high!”

Revive! provides a service fixing minor damage to cars with over 135 technicians nationally servicing the fleet dealer and retail markets.