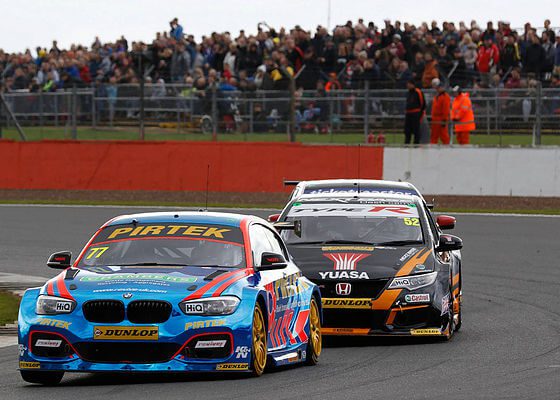 Andrew went into the weekend on a high following his third win of the campaign at Rockingham, and was keen to try and score three solid points finishes at the wheel of his West Surrey Racing-run BMW 125i M Sport.

Qualifying would prove to be tight affair with less than a second covering the full 32-car field, with Andrew securing 16th on the grid for the opening race of the weekend.

Having climbed to twelfth in the early stages, Andrew would slip back down the order after contact in the field and was then unfortunate to get caught up in someone else’s incident on lap 14 and was forced to retire.

With his damaged car repaired for race two, Andrew lined up 26th on the grid and was making up places before a puncture resulted in an unscheduled pitstop that dropped him off the lead lap and resulted in a 27th place finish.

Luck would finally be on Andrew’s side in race three however, with a solid drive through the pack that saw him race into the top ten; avoiding a number of incidents ahead and showing the pace in the BMW to cross the line in eighth spot.

Andrew ends the weekend eighth in the championship standings heading to Finals Day at Brands Hatch at the end of the month.

“There’s no doubt that today has been a tough day, and through no fault of our own,” he said. “We made up places early on in race one and were working our way forwards when I got hit and dropped down the order. That meant I was then in the wrong place at the wrong time when it kicked off ahead.

“The team did a great job to repair the damage but it was a similar story in race two when I got hit again and then had a tyre let go at Luffield, which meant we failed to score for a second time.

“The car felt good in race three despite being on the hard tyre and the luck was with us a bit more. Things opened up and we came through to score a decent top ten finish, although I think that also shows how we could have come away from the weekend with a lot more.”