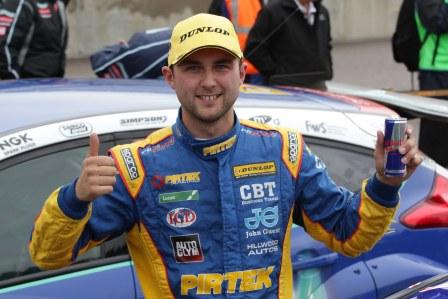 Revive! sponsored BTCC driver Andrew Jordan is now at the top of the leader board following some brave racing at Rockingham last weekend.

The biggest weekend of Andrew Jordan’s racing career to date comes next at Silverstone in the 2013 Dunlop MSA British Touring Car Championship (28/29 September) as Andrew and Pirtek Racing lead the overall title race heading for three races at the Northamptonshire track, the home of British motor racing.

However, Andrew faces a very tough weekend for rounds 25, 26 and 27 of the 30-race season at a track where the Honda Civics will struggle with the success ballast they have to carry. More than any other track on the schedule, Silverstone is about straight-line speed, and this is where the extra weight penalises the Hondas against the rest of the field. For Andrew and Pirtek Racing, Silverstone is all about damage limitation.

After a fabulous 2013 season to date for Pirtek Racing, Andrew took the overall championship lead with a peerless performance last time out at Rockingham. For the first time, the Pirtek car won twice in a day and, as his rivals faltered, Andrew leapt into the overall title lead. He left Rockingham with a 30-point lead over title rivals Gordon Shedden, Colin Turkington and Matt Neal.

Andrew also leads the Independent Drivers’ title race by 42 points; Pirtek Racing is currently third in HiQ Teams’ Championship and is leading the Independent Teams’ Trophy by 34 points. To date, Andrew has taken race wins at Donington Park, Oulton Park Snetterton, Knockhill and twice at Rockingham. He has now scored more race wins in 2014 than any other driver.

Andrew says that the Rockingham weekend was a real turning point in the season, but he is not getting too excited just yet as he knows that Silverstone will be a very difficult weekend. “To go into the Rockingham weekend six points behind and go out 30 points ahead: it doesn’t get much better than that,” he said. “But Matt Neal had a bad day at Rockingham, and that could be us at Silverstone. There are still six races to go, so I don’t want to get too excited. Silverstone will be tough for the Hondas, but we’re really only racing the other two Hondas at the moment.”

Next round Silverstone Sunday 29 September.