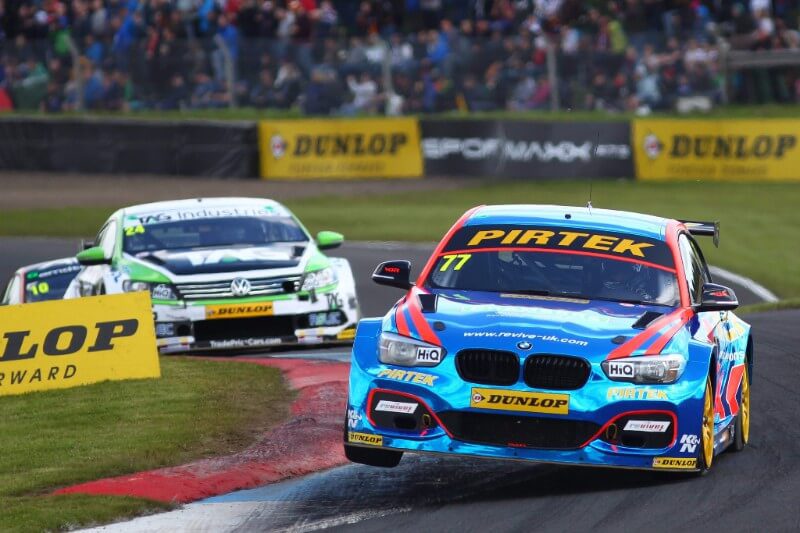 Revive! sponsored Andrew Jordan says he feels confident of pushing for strong results when the Dunlop MSA British Touring Car Championship heads for Rockingham this weekend for the eighth round of the year.

The Lichfield racer goes into the weekend looking to add to an impressive past record that has seen him take to the Rockingham podium on six occasions – including a double win back in 2013 en-route to his championship title.

Andrew’s podium record sees him sit fifth on the all-time list at the Northamptonshire circuit, with the 28-year-old confident of once again running at the sharp end of the field in his West Surrey Racing-run BMW 125i M Sport.

So far this season, Andrew has taken two victories at the wheel of his distinctively liveried BMW and has shown impressive pace throughout in his first season in a rear-wheel drive touring car – including last time out at Knockhill.

There, he battled back from an unfortunate DNF in the second race of the weekend to finish just shy of the top ten in race three – despite starting from the back of grid.

It was a drive that Andrew described as one of his best of the year, and similar pace is targeted this weekend as he seeks to break into the top six in the championship standings.

“It was unfortunate that we didn’t put more points on the board last time out at Knockhill, but the pace that we showed leaves me confident heading to Rockingham,” he said.

“It’s a circuit that always makes for good racing and whilst I expect the front-wheel drive cars to be strong in qualifying, I think the BMW will be strong when it comes to race day.

“One of our big advantages is that we have a car that is good on its tyres, and I think that is something we can look to benefit from this weekend. We need to be patient in the early stages and then play to our strengths as the races go on.

“If we can do that, then I’m very confident that we can come away from Rockingham with some good results to our name.”

After qualifying on Saturday 26 August at 15.30, the first of Rockingham’s three BTCC races will be at 11.37 on Sunday morning, with race two at 13.57 and race three completing the race weekend action at 16.40.

All three races will feature as part of the BTCC’s extensive live coverage on ITV4, with qualifying being available at ITV.com/btcc